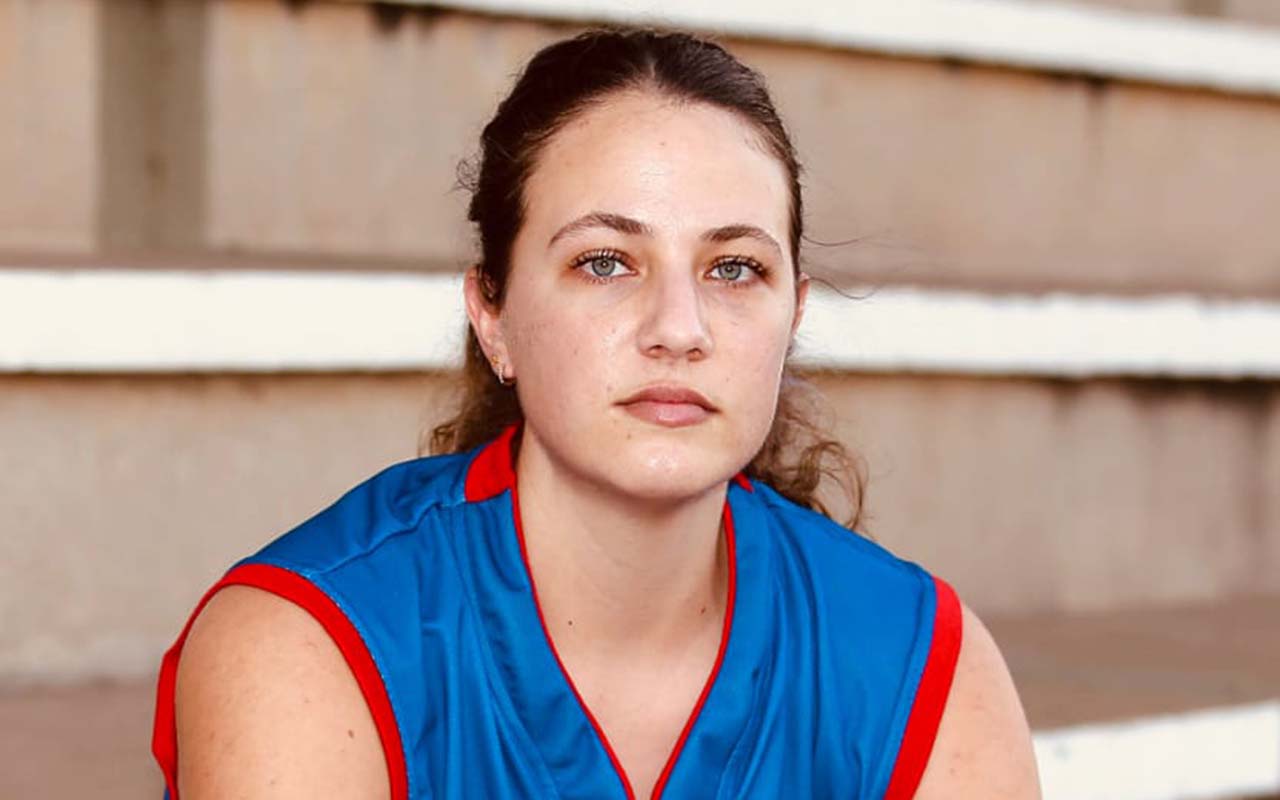 Tuks Basketball player, Alika Meyerkort is an advocate for equality in sport and hopes to become a representative on the South African Women’s Basketball Association board one day.

Raised in a German household, the Cape Town-born is currently completing her thesis on gender equality in the basketball community and believes that male counterparts should be encouraged to amplify women’s sport coverage.

Apart from her ambitions to get involved in driving gender equality in sport, she dreams of representing South Africa at an international competition and playing alongside her favourite player, Gabby Williams in the Euroleague.

Meyerkort reveals if she wasn’t involved in playing basketball, she would be playing in another sporting code.

Speaking with Tlamelo Kganakga, Meyerkort chats about her journey in sport and bouncing back from setbacks.

Alika, thank you for chatting to us. Please tell us more about yourself and where you are from?

I was born in Cape Town; however, I was raised in a German household, which gave me my international exposure to different cultures as well as my varied appreciation of community values.

When and why did you decide that you wanted to get into basketball?

When I started high school, students had to choose a summer sport and a winter sport, and I chose to go to basketball trials just to try something new. I did not expect to fall in love with the sport like I did, so even though I played various other sports at the time – my main focus was on basketball, and I played it all year round.

I would play basketball for my school in summer, and I played club ball during the winter months.

I think I was hooked because it incorporated more than one aspect of athleticism – namely, fitness, speed, strength, jumping and not to mention the mental toughness needed to play in such a physically demanding sport. I also noticed the gender inequality in the sport quite early on and I knew I would want to get involved more seriously when I got older to help create change for those girls who came after me.

Please tell us about your journey landing at Tuks Basketball.

Tuks is the fifth basketball club I have joined over the course of my basketball career – and it is the shortest time I have been a part of a club thus far, however, I have learnt the most in this environment. Not just basketball wise but also character wise. This is partly due to my senior role in the team and the expectations that come along with it. It motivates me to be a better player, team-mate, and friend.

As the WBNL is rather a new league, the opportunity to be called up to play for the first Western Cape team was quite an uplifting moment for me and I am very proud to be playing for my home province.

What do you love about basketball and if you didn’t play it, where would we find you in sport?

It is always evolving, and one needs to be able to adapt and change accordingly or one won’t be able to keep up with the sport.

This brings that increased competition not only from other players but also within yourself. Having said that, despite all the life lessons and the people that you meet along the way, the main reason why this sport has grown on me so much is honestly just the immense amount of joy it brings me. People often forget that should be a big factor in why we do things, and I try to keep that in mind.

If I didn’t play basketball, I would be running around on another sports ground that’s for sure! – I know I would always be playing some type of sport. But once things slow down for me, I would be helping the sport to grow in one way or another; whether that would be sitting on governing boards or working with athletes one on one – either through life coaching or therapy.

What has been a setback in your career and what did you learn from it?

I sustained a head injury early in 2019 just after our very first game of the season, which set me back months of work in preparation for the USSA tournament that year. However, I returned to the courts two weeks prior to the tournament tip off and was still selected for the national squad that year.

I learnt two things that season. One – if you think you can do something or if you think you can’t do something, you’re probably right. Your mind is a strong tool, so use it for the better. And two – if you want to achieve great things, you need to ask for help. My team-mates helped me with the new plays I missed out on, and Coach Thesline Davids helped me with individual workouts every single day for those two weeks.

There are people who want to help you, you just need to ask – and this goes for sports, academics and/or in life.

What are the challenges you have faced getting into basketball?

A challenge faced by both me, and my fellow sportswomen is the ongoing gender inequality and stereotyping in sport; while a personal challenge is keeping a strong mindset when faced with such challenges.

What has been the highlight of your career so far?

Being selected for the National Squad, playing in the WBNL, and seeing how the recently established South African Women’s Basketball Association (SAWBA) is creating a foundation to promote, encourage, develop and support women and girls within the basketball community.

Who would you say inspires you to be a better player?

Coach Thesline Davids, Coach Nompumelelo Ramatsoga and Coach Kimathi Toboti. Each of them have taught me incredibly valuable lessons both on and off the court.

Which league do you play in and who your biggest opponent?

Currently our biggest competitor in the club league is Vaal University of Technology (VUT). While in the WNBL, where I play for WC Mountaineers, our current focus is on Limpopo Pride who we will be facing in the semi-finals at the end of the month.

What would you say is your fondest memory playing in the Basketball National League?

To be honest, just being able to play alongside the top basketball players in South Africa is a memory I will always cherish.

If you could play for any team abroad, which team would it be and why?

I think every sportsman and woman would love to play alongside their favourite player so I would choose Sopron Basket in the Euroleague because of Gabby Williams.

Becky Hammon was the first woman full-time assistant coach in NBA history in 2014. She was also the first full time woman assistant coach in any of the four major professional sports in North America (MBL, NBA, NFL, and NHL). Hammon was also the first woman head coach in the NBA summer league (becoming the first woman NBA head coach to win a Summer League title). Despite facing great adversity, her persistence and determination has shown such inspiration that since she started working on the NBA sidelines, 9 women have joined the NBA coaching ranks. I admire her work ethic, her mental strength, and her drive to reach her goals despite of what other people think.

Naomi Osaka is only 24 years old and already the highest paid sportswoman in the world, giving her a huge influence in the sporting world. This year she withdrew from the French Open citing mental health and revealing that she suffered long bouts of depression since 2018. One of the best tennis players of all time speaks up about how strength and softness can go hand in hand. This reminds me of how sports psychology is so important and keeps me motivated in pursuing this career.

What do you think about gsport and its impact on the growth of women’s sport?

I am currently writing my thesis on gender inequality in the basketball community and one of the aspects that greatly influences and supports gender stereotypes is the media – so gsport is really fighting inequality where it is most dominantly portrayed which is so great to see.

Lastly, what do you think we as media can do to amplify women’s sport coverage?

Women alone are not responsible for the lack of gender-based representation in sports management. Since gender inequality has become an institutionalised practice within sport organisations, male counterparts hold equal responsibility to encourage, promote, and support women in leadership positions in the sport sector – so to amplify women’s sport coverage it is also important to encourage male allies to participate in the fight for gender equality in the sporting world.

Not only are sportswomen and coaches important to interview but a focus should also be put on South Africa’s sports department. Policies are put in place for gender inclusion in sport; however, social exclusion and other forms of marginalization are still evident despite these policies. Receiving input from those that are implementing these policies would be an informing conversation.

Without the implementation of gender inclusion policies, women and girls may miss out on a range of health benefits.

The health benefits of women’s participation in sports are not just physical but also mental. It promotes psychological well being, builds self esteem, and reduces stress and anxiety. Sporting codes may also increase opportunities in the educational sector, through scholarship opportunities.

Photo 1 Caption: Tuks Basketball player, Alika Meyerkort is an advocate for equality in sport and hopes to become a representative on the South African Women’s Basketball Association board one day. Photo: Supplied