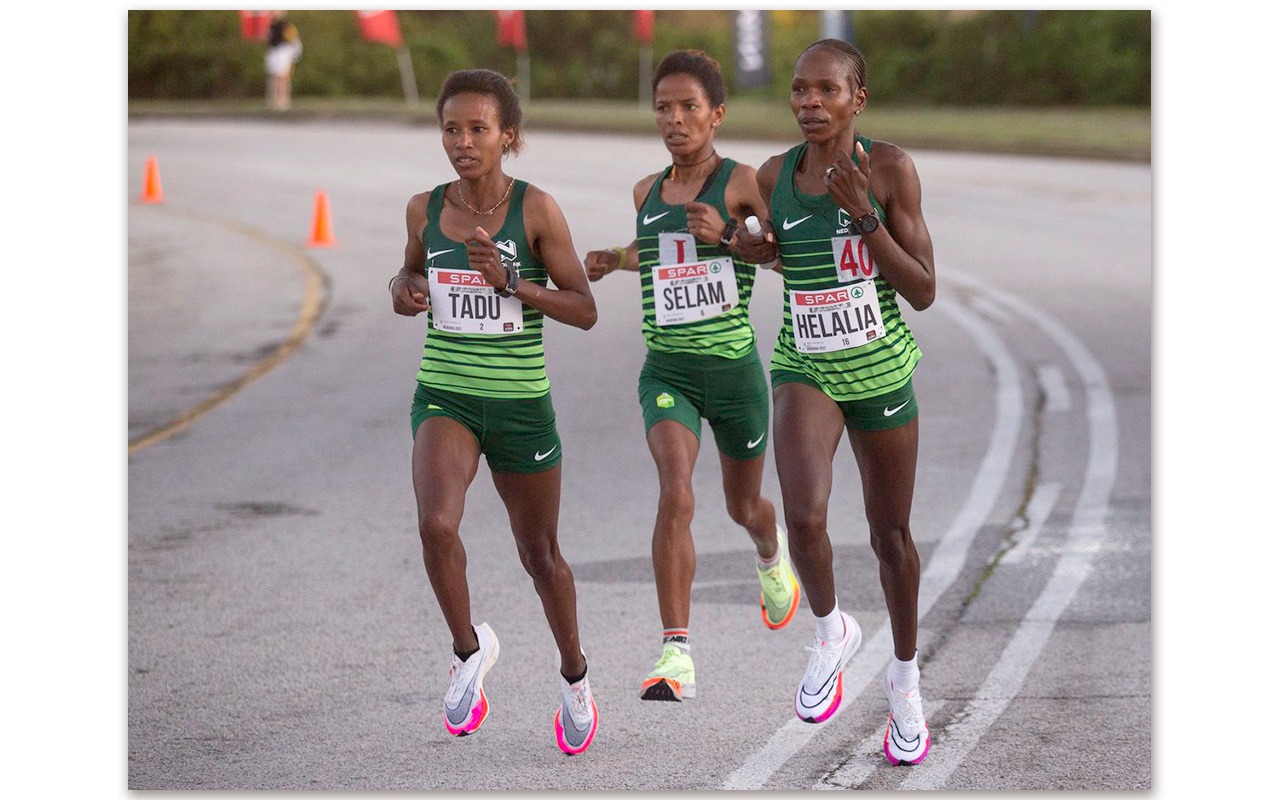 Helalia Johannes became the first woman in the world over 40 to run 10kms in under 32 minutes when she sprinted to victory in the SPAR Women’s 10km race in 31.53 minutes, at Nelson Mandela University in Gqeberha on Saturday morning.

Tayla Kavanagh of Murray & Roberts was the first South African home, in 32.33.

It was a very fast race, with the first 11 runners all finishing in under 34 minutes. Johannes and Nare ran side by side for the first eight kilometres, where 41-year-old Johannes broke away.

Johannes, who missed the 2021 SPAR Grand Prix series because of international commitments and injury, said she was not surprised at her time, because everything had gone according to plan.

“I was running at the pace I planned to run,” she said.

“Age is just a number.  As long as my body responds the way I want it to, I will run fast.” – 41-year-old Helalia Johannes, world-record winner of the SPAR Grand Prix in Gqeberha

Nare, who won every SPAR race last year, said she was happy to have Johannes back in the series.

Nare, who had to travel between Addis Ababa and South Africa between all the SPAR races last year, said she would be going back to Ethiopia, but she was happy that this year, there was time to recover between the races.

Johannes will miss the race in Tshwane in August because she will be running the marathon at the Commonwealth Games in Birmingham.

Kavanagh was very pleased to have been the first South African across the finish line.

“Everything went according to plan; the weather was good and I am very happy with my time.  It was exciting to be running against some very good runners, but I always run my own race and try my best.”

Kavanagh said she was not sure if she would run all six SPAR races this year.

“I will discuss it with my coach and we will decide which races I should run.”

Three-times SPAR Grand Prix winner Irvette van Zyl, who was seventh in 33.06 minutes, was also very satisfied with her time.

“I still have the Two Oceans ultra-marathon in my legs, so at five kilometres I decided just to run for the bonus points for an excellent time. I was happy with my time and my legs are getting better.”

The next SPAR Grand Prix series is in Durban on June 26.

Photo 1 caption: Helalia Johannes (right) became the first woman in the world over 40 to run 10kms in under 32 minutes when she sprinted to victory in the SPAR Women’s 10km race in 31.53 minutes, at Nelson Mandela University in Gqeberha on Saturday morning. Ethiopians Tadu Nare (silver, left) and Selam Gebre (bronze, centre) made for an all-Nedbank runners’ club podium, with Murray & Roberts’ Tayla Kavanagh in fourth place was the first South African home. Photo: Spar Grand Prix / Rogan Ward on Twitter