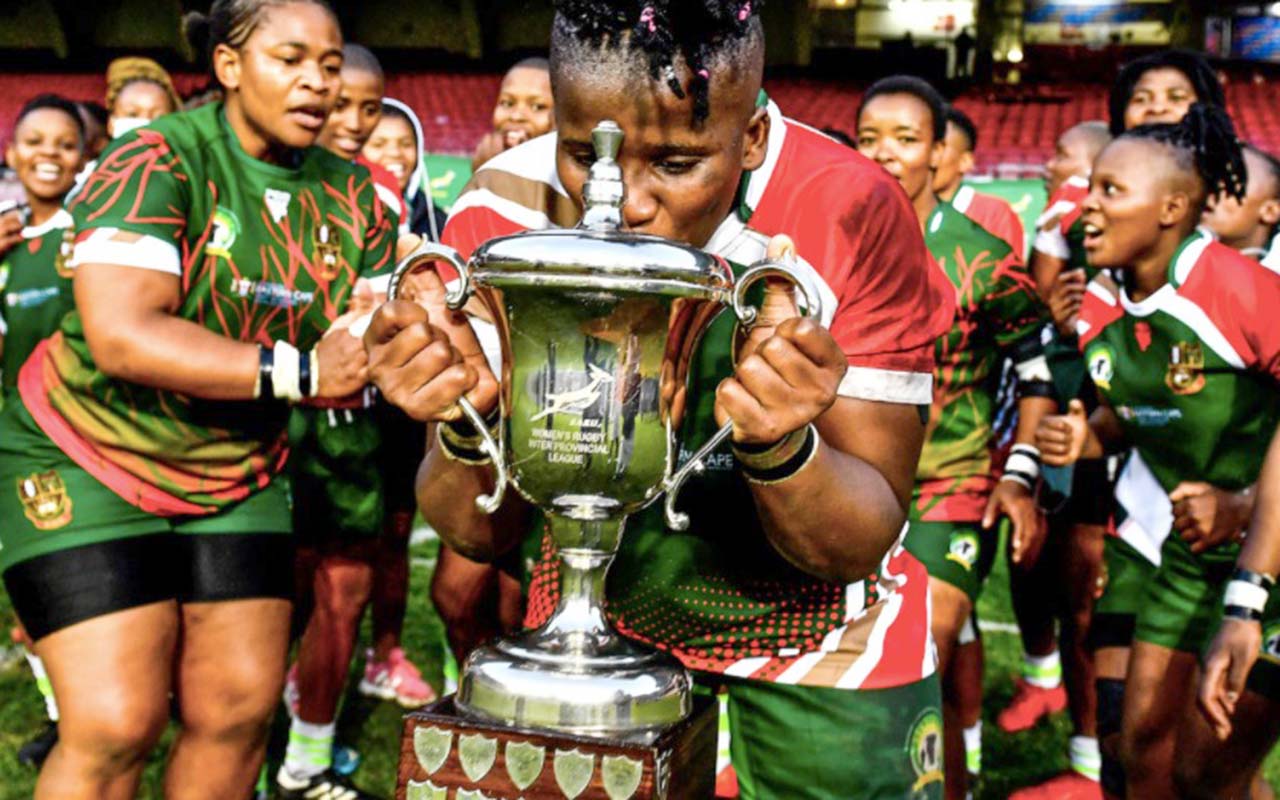 Border Ladies spearheaded by a magnificent Lusanda Dumke outplayed Western Province 24-15 in a pulsating Women’s Premier Division final in Cape Town on Friday, 16 July 2021, upsetting the defending champions and claiming the most valuable prize in local women’s rugby for the first time since 2016.

Dumke, at No 8 and wearing the captain’s armband, showed her international class with a massive performance, winning numerous turnovers, starting attacks with strong drives and playing the ideal link game where needed.

As good as Dumke’s individual performance was though, so good was the team effort from the East London team, coached by Nwabisa Ngxatu. Although they were leading from the 12th minute of the match and held a 11-5 lead at the break, they really responded in the last 20 minutes of the match, when the home side had closed the gap to one point.

An emotional Dumke praised her team-mates for their dedication afterwards.

“It’s difficult to explain my feelings now, but I can only laud the discipline, hard work and unity of this team, they never gave up,” said Border Ladies skipper, Lusanda Dumke, after the remarkable win.

“Playing against Western Province is never easy, because they never stop playing, but we remained in the fight until the end and for that, I respect all these girls, they’ve made me very proud.”

WP captain Cindy Booi said: “We gave everything that we had, but in the end, the best team won the final. We knew it wasn’t going to be easy against Border – it’s always tough against them.”

The Border side reverted to their strengths – giving the ball to Dumke from dominant scrums, tackling every blue and white hooped jersey backwards and playing with a territorial and test match mindset.

Credit in this regard must go to Border flyhalf Yandisa Nobanda and fullback Snenhlanhla Shozi, who kept the home side pinned in their own half with good kicks, forcing the defending champions to attack from deep.

Focus on Crossing the Try Line

The first half started off with lots of endeavour. Both teams had clear intentions – crossing the tryline – but with that came an over-eagerness and not building phases. Both sides visited their opponents’ 22 in the first 10 minutes, but neither could find a way to get the scoreboard going.

Border wisely decided to revert to a more basic structure and with the industrious Dumke leading the charge, they started to drive and maul, a tactic that brought immediate results.

The home team’s pack reverted to illegally stopping those attacks and Nobanda kicked penalty goals in the 12th and 20th minutes as the Border side set up camp in the WP half.

That territorial pressure soon delivered a try as well, with left wing Sesethu Mbodli going over in the left corner after lovely hands and continued pressure by her inside players.

The home side at this stage lost composure and conceded way too many penalties.

WP Turn from Loss of Composure by Keeping the Ball Alive

The 0-11 score line after 30 minutes must have shocked them, and DHL WP started to keep the ball alive. An attack started by Veroeshka Grain back in her half saw her fellow wing Simamkele Namba going over in the corner. The try gave Province some focus and direction after that and it was only dogged defence by Border that kept the Capetonians out.

Border wasted a kickable opportunity with a quick-tap that resulted in no points and WP missed a scoring chance with a poor pass before referee Ashleigh Murray-Pretorius called halftime with Border 11-5 up.

The second half started with more thrust from the home side. They started to take on the Border team physically and that worked. The visitors held onto the ball when in possession, but their kicking game faltered, which opened up counter-attacking possibilities for WP.

Fullback Donelle Snyders sliced through the Border defence from a scrum close to the line to cut the lead to one point after 50 minutes and at that stage, the home side looked set for another undefeated season.

Card that Tells the Tale

A potential momentum swift happened on the hour mark. WP centre Zinthle Mpupha was yellow carded for yet another ruck infringement and the visitors took full advantage. Border opted to take a quick-tap penalty, set up a number of phases, with replacement front rower Nayiphi Owethu very prominent, before releasing it through the hands with Mbodli getting a second try.

That pushed the lead back to six points and Border looked set for a remarkable win when centre Zintle Holofela finished a brilliant team try, which was sparked by the omnipresent Dumke.

First, the Border captain forced a turnover penalty on her own 22 with WP on the attack. Dumke took a quick tap with the WP players expecting a kick to touch, found runners on her outside and gave a final pass to Mbodli, who looked set for a third try.

Mbodli was tackled into touch meters out, but when WP lost the lineout, Border played the numbers game and were rewarded when the centre ran in to increase their lead to 11 points.

WP’s replacement scrumhalf, Felicia Jacobs scored from quick penalty near the Border line as the home team gave everything they had on attack, but a third penalty goal by Nobanda, two minutes from full-time, sealed the win.

Libbie Janse van Rensburg of the Blue Bulls Women finished the season as the top points’ scorer, with 71 points, which included seven tries, while Veroeshka Grain of DHL WP’s eight tries were the most in 2021.

Click on the image below to read the Tournament Final Preview:

Click on the image below to read the Ninth Round Results:

Click on the image below to read the Eighth Round Results: