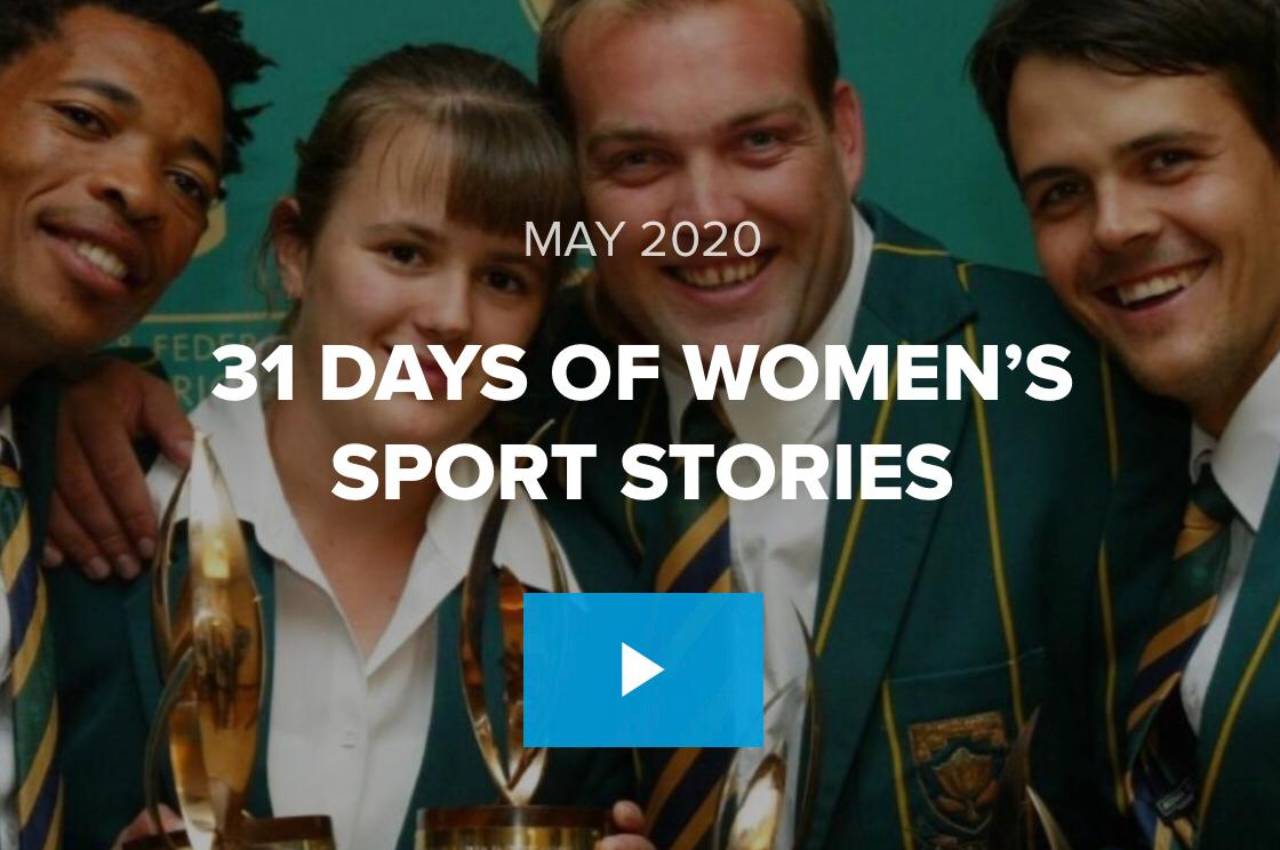 Since the start of the Covid-19 lockdown in South Africa on 16 March, gsport has told one inspiring story a day to remain on track as we raise the profile of women’s sport.

At the end of the initial 21-day lockdown period, it was heart-warming to see the lives we had touched by acknowledging the journeys of outstanding women in sport.

At the end of April, we once again gathered as a team and recommitted to our vision of telling at least one inspiring story a day. This time, we pushed hard to widen the net and reach out to women in sport on the continent and around the world, as we told rich, diverse stories, that truly give us reason to believe that women’s sport will bounce back after the pandemic.

When we reflected on the month of May this past week, we realised that we had outdone ourselves and actually told 32 stories in 31 days.

If you missed any of these, or just need reminding that greatness awaits you, we have gathered all the inspiration from May and pulled it all together for you right here.

Read their stories and be inspired!

United States’ star track and field athlete, Gabbi Cunningham is the reigning US 60m Indoor Hurdles Champion, who traded in her singing, dancing and acting interests to pursue a professional career in hurdles and sprints, and has never looked back.

Leading Pakistan women’s sport activist, Ebba Qureshi, is calling for physical education to become compulsory for girls at school and she plans to impact 100 schools in five years with her husband, former Pakistan all-rounder, Azhar Mahmood, through their FemGames project.

Award winning sportscaster, Lindiwe Dube, wants to use her voice to inspire young girls growing up in disadvantaged areas to always believe that they can make their dreams a reality.

Nedbank Running Club’s, Fikile Mbuthuma celebrates 15 years of marathon running this year and is aiming for even greater success on the world stage, including a possible top five Comrades Marathon finish and a World Champs gold medal.

Sports Scientist and Western Province Women’s Cricket Team Manager, Gabi-Lee van der Westhuizen dreams of going global as she passionately contributes to cricket while building herself up to rise even higher.

Two-time Olympian, Geraldine Pillay, is giving back to her community of Macassar to inspire the youth. She encourages South African Olympic athletes to sharpen their skills during COVID-19 lockdown for the Tokyo Games, which will take place in 2021.

Veteran COSAFA Secretary General, Sue Destombes wants to leave a legacy within the organisation. This hard working administrator has been breaking down barriers in her workspace, since 1994.

Prolific New Zealand photographer, Alisha Lovrich, shares her inspiring journey and key insights into how she has risen up to become one of the best in the business.

Dalima Chibber is one of India’s most promising footballers. Her stupendous goal against Nepal in last year’s SAFF Final caught the attention of internet fans, who couldn’t get enough of her striking power. Currently based in Canada, the talented star dreams of leading India to FIFA Women’s World Cup Qualification.

Retired South African Olympic rower, Lee-Ann Persse, is using her personal struggles with mental health to help other athletes experiencing similar situations through The Girls Only Project podcast. She also highlights competing at two Olympic Games and the impact of losing her father.

Talented Tuks Varsity Football captain, Thalea Smidt, dreams of signing a professional contract and representing Banyana Banyana. For now, she is focussing on boosting her academic qualifications as she recovers from a leg injury that has kept her out of the game for eight months.

Zimbabwean marathon runner, Rutendo Nyahora, plans to continue her preparations to qualify for the Olympic Games as she aims to represent her country at the global showpiece for the second time in her career. She also shares advice to aspiring sportswomen.

For the past six years, Zola Thamae, has held her own as the only woman provincial cricket union president in South Africa. The formidable Free State Cricket Union President tells us about women occupying leading roles for the first time need to be inducted and given ongoing support.

Up and coming junior tennis star, Kaitlyn Ramduth, is rapidly making a name for herself both on the local and international front as she aims to proudly fly the South African flag high. She reveals her greatest sporting dream and highlights of her career so far.

Nigeria’s Ebi Onome, the first African player, male or female, to appear at five editions of the FIFA World Cup, speaks about honouring her call to play football from a young age, the state of the women’s game in Nigeria and her aspirations to play a key role in shaping the sport.

Ursula Grobler continues to thrive after packing up her life in Seattle in the United States and moving back to South Africa to pursue her dream of wearing the green and gold colours of her nation on the biggest stage. She reflects on her rowing journey and current involvement with the rowing community.

Canoeing South Africa President, Kim Pople, is passionate about people satisfaction and believes she will remain involved in sport administration for as long as her leadership is required. She highlights her journey to becoming only the second woman President of Canoeing South Africa and how she plans to develop the sport.

Central Gauteng Lions Women’s Cricket Administrator, Takatso Mkhwanazi, is playing a vital role in ensuring that schools from primary level invest in developing girl cricketers for the national team. She reveals the challenges women’s cricket faces and her plans for the future.

2014 Youth Olympic gold medallist, Gezelle Magerman, is eager to make a successful comeback to the athletics track as she strives to qualify for the Olympic Games. The athletics star chats about her achievements so far and plans for life after athletics.

World Surfski League Champion, Hayley Nixon, has never been so excited to miss a season of racing as she and her partner, Paul, are set to become first-time parents. She opens up about her new family focus and plans to keep inspiring women paddlers.

Banyana Banyana stalwart, Noko Matlou, the first South African, male or female, to win the CAF African Footballer of the Year award, speaks about her achievements and plans to develop the next generation of female footballers on the continent.

Ghana-born global sports broadcasting trailblazer, Benny Bonsu, is known as the Oprah of Sport because of her witty, straight to the point interviewing style. She chats about her passion for mentoring and her wish to be Africa’s Olivia Pope.

Grace Chirumanzu is championing women’s sport in Africa through her initiative, The Sports Queen. Zimbabwe’s 2018 Sportswoman of the Year chats about her journey in sport and the legacy she would like to leave.

South African golfer, Yolanda Duma, is aiming to walk in the footsteps of world number one ranked woman golfer, Inbee Park, and become the best. She discusses  her journey and plans to own a golf academy.

From physical education teacher to administrator, coach, manager, umpire and now President of South African Schools Netball, we celebrate the journey of pioneer Di Woolley, who talks about her passion to fight for what is right.

South African Olympian, Alyssa Conley, has not ruled out the possibility of returning to the athletics track to feature at the 2022 Commonwealth Games after trading her 21-year athletics career for Sevens Rugby. She chats about her sports journey and her biggest lessons.

Popular South African athlete, Nolene Conrad, is raising money for athletes affected by the Covid-19 lockdown while working hard on establishing her newly launched online coaching business. She opens up about the postponement of the Olympics giving her more time to recover from injury and work to qualify for the 2021 showpiece.

Rowing South Africa Development Coordinator, Virginia Mabaso, aims to impact every province as she develops rowing from grassroots and introduces the sport to new districts. She tells us about balancing family and work while indulging in her passion for fashion designing.

ABC News’ Brittany Carter continues to champion women’s sport in Australia by encouraging athletes to share their stories on the Ladies Who League podcast platform. Carter shares her thoughts on the growing support of women’s sport and overcoming challenges in her career.

2019 Momentum gsport Awards Woman in Social Media winner, Lee-Ann Mpofu, wants to make her presence felt internationally. She chats about how winning the gsport Award has encouraged her to take her career to the next level.

During the month of June, we are continuing to profile women in sport as we shine the spotlight on the youth stars who are making a name for themselves in the world of sport.

If you have any suggestions of young women in sport to profile this #YouthMonth, please contact us here.